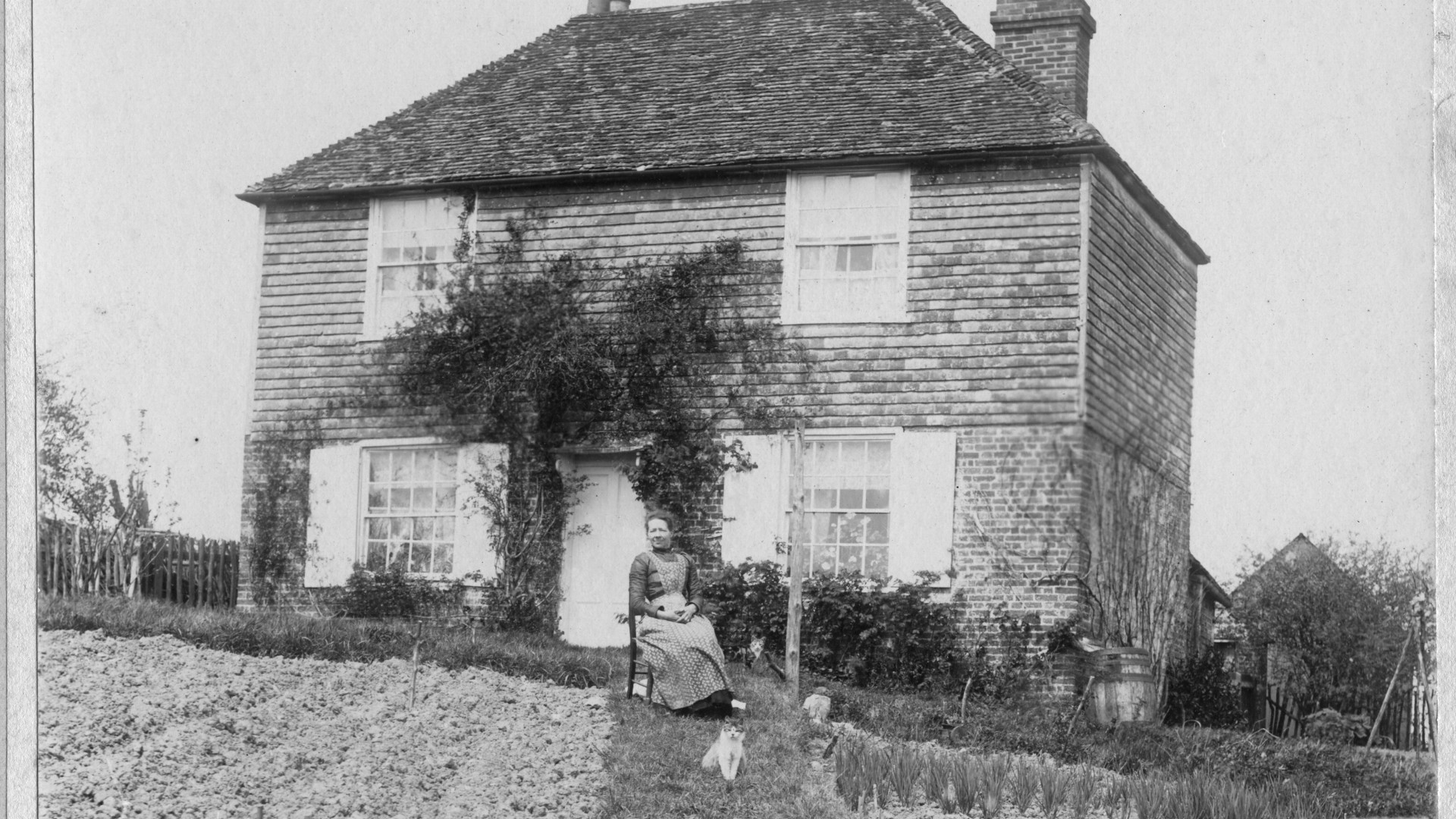 Prior to the 17th century the name "Boulding" as such was virtually unknown in Kent.

The origin of name Boulding starts life in the 13th century as "de Bollyng" or "de Bullyng" and gradually by the late 16th century with an added "d" inserted into Bollyng more and more frequently. By the 18th century the name - with the added "d" - became the norm and the name is now routinely written as "Bolden", "Boulden" or "Boulding". Some earlier examples use two different spellings in the same document.

The addition of the apparently spurious letter "d" to a name appears elsewhere; for example in the name "Aldgate" in London where documents show that the "d" is missing in documents written before 1486-87 and so the added "d" may well have been the result of some kind of linguistic change in our English language.

That the name is initially found with the preposition "de" is certainly suggestive of a locative name - and this spelling - "de Bollyng" or "de Bullyng" - more or less continues unchanged up to and until around the late 16th century and early 17th century. It's highly likely that "Bullyng" or "Bollyng" was an early attempt to write "Boulogne" although Boulogne wasn't occupied by the English until the Hundred Years war between 1337 to 1453.

There is a Bullinge Corner (NGR 120662) by the junction of All Saints Church, Whitstable, a town where it is known the family was in possession of property; "Bullinge Borough" in the Hundred of Upper Whitstable. It is uncertain whether the place name is taken from the family or the other way around. It is more likely that this location was a Bullyng family property as they seem to have been an important family in the Hundred of Whitstable because in 1315 we find a John de Bullynge paid 2/6d in the Lay Subsidy Rolls, a not insubstantial amount at that time.

The first noting of the name in Kent - found to date - is in the Curia Regia Rolls of 1249-50 where there is a mention of Christianam de Bullinge as a neighbour in Whitstable.

The second noting of the family in Kent is around about the same period as above: "an annual payment of 23½d free rent, payable by Roger de Bullinge, Ralph Sandbreil, the heirs of Robert Burel and Simon Noreis" for property that appears - yet again - to be in Whitstable.

After this a mention of the name is found in the Whitstable Hundred Rolls of Richard de Bullyng in 1274 - possibly even the father of John who paid 2/6d tax 40 years later in 1315:

"They say that Henry Malemains and his associates, collectors of the tax of one-twentieth, took 13s. more than the assessed amount from this hundred and Hamo de la Forstall, the sheriff, took 1 mark unjustly from a certain John Symon' who had accompanied a certain man towards the church and and he killed that man on returning from church, afterwards the same John was acquitted by the jury. Then the same Hamo took 5s. from Richard le Nute accusing him of being in debt to the Jews and he had never been so. The same Hamo took 5s. from Richard de Bulling in the same way and 3s. from Joceus de la Brok for a similar reason."

Twenty eight years later in the year of 1303 the name appears in the Court Manor rolls of Tremworth Manor, a manor which approximates roughly to modern day Crundale parish near Wye, a tiny isolated parish of but few families, situated between Canterbury and Ashford.

Crundale appears to be the very centre of the origin of the family and Bouldings and Bouldens living very nearby, even to this day. Hardly anyone of this name from Kent does not stem from this little parish or the nearby parishes of Canterbury, Wye, Godmersham, Waltham and Elmsted - and probably from Whitstable before that. Since the mid 17th century the name Bollyng appears to have been completely replaced by Boulding or Bo(u)lden as the preferred spellings.

There has been a strong connection between the Bollyng family of Crundale parish (Bollyng and Bullyng are interchangeable) and the Bollyngs of Whitstable because in 1315 and 1348 till 1403 the same group of families - a sort of consortium - appear to have held land in both places as noted in the Inquisitions Post Mortem on the death of the various Earls of Gloucester:

The Inquisitions Post Mortem continue with the exact same families involved from 1315 to 1403 with the same interests in Dodingdale - property held by Tremworth Manor (Crundale parish) and Whitstable for nearly 100 years; a clear link between the two parishes of Whitstable and Crundale. This connection is known to have lasted until the mid 17th century.

In 1521 the High Sheriff of Kent, William Roper (circa 1496 - 1578), married Margaret, the favourite daughter of the Lord High Chancellor and author of Utopia, Sir Thomas More. William's father, John Roper (circa 1453 - 1524) of Eltham, died in 1524 and left a legacy "to pray for the soul of Ric. Bollinge"; Richard, is almost certainly Richard Bollinge (circa 1455 - 1517) of Crundale and Godmersham. Richard's neighbour in Godmersham, Jane Frognalle, is also remembered in this Will. The Roper and Bollyng families both had property in St Dunstan's Canterbury and would have been well known to each other and were almost certainly family. John Swann (14?? - 1498), former Mayor of Canterbury, was married to Joan Bollyng (circa 1444 - 1504) and he left money in his Will to William Roper.

The Boulding family, from the very start of the 14th century onwards, was regularly found at the Wye Manor Court (Tremworth Manor) for the "Assize of Ale". The Assize of Ale was normally a fine levied for selling short measure or, indeed, bad beer or bread. However, a suggestion has been made that, rather than it being a fine per se, it was an early method of licensing brewing not dissimilar to that which we have today where the sale of alcohol is licensed.

The name Boulding/en can also found today in Norfolk and Warwickshire and a number of Bouldens in Cornwall but more interestingly in north Holland and Denmark suggesting possible Saxon origins, for the suffix "ing" means "son of" in early English thus arriving at a meaning of "son of the bold".

There is also the famous Bolling family of Bolling Hall, Bolling near Bradford, once a powerful family until they supported the wrong side in the Wars of the Roses and one often wonders if the Kentish Bollyngs were an offshoot of this family. Potentially this connection has already been found because in the Calendar of entries in the Papal Registers, Petitions to the Pope: "1364 f82 Thomas, son of Robert Bolling of Sandwich. For a benefice in the gift of the prior and convent of St. John's, Beverley." This is a direct link with the Kentish family and the Bollyngs "up North" in Yorkshire.

Bolling is, of course, the same name as Boleyn. The father of King Henry VIII's second wife, Anne Boleyn, signed his own name "Bollyng" in a letter written to his daughter Anne at Hever [see letter hanging on the wall at her home in Hever Castle, Kent].

One of the first settlers to America in Jamestown, Virginia, was a Thomas Boulding (born circa 1584) who made his voyage in 1607 on The Swan - a journey which pre-dates the Mayflower by nearly 13 years. Whether this Thomas Boulding is from the Kentish family is not, alas, clear but that the Kentish Bollinges/Bouldings were strong conventiclers - seperatists from the church of England - and had close family who later settled in Martha's Vineyard is certain.

Thomas Boulding (1592 - 1663) from Crundale, Kent - my own direct line - had a sister in law, Joyce Baker, married in 1623 in Ashford to a Nicholas Butler who left for America on the Hercules in 1636. Butler is one of the American Bush family progenitors. This same Thomas's son, Robert Boulding (1634 - 1717), married Miriam Starr whose uncle, Comfort Starr, went to America and helped found Harvard university.

1926: Bonnington's "grand old man" Mr Charles Boulding, passed away on Sunday at the age of 90 years. By his death the district loses a truly remarkable man, who never experienced a days illness in all his 90 years. He was born in September 1836 and for the past 50 years resided at Goddards Farm, Bonnington. For a number of years he was in partnership with his brother [George] at Court Lodge Farm. He also had extensive agricultural and grazing interests in Romney Marsh.

Mr Boulding's very active career included public work as Overseer, Guardian, District Councillor (East Ashford Union) and Rate Collector. He was a Tory of the old school and it is interesting to note that his last political activity took him to Bilsington by motor car to record his vote at the General Election 2 years ago. On this occasion he was accompanied by Mr William Higgins who was the same age, 88, and has since died. Mr Boulding could relate many humorous political stories of the old days. He was then a man much sought after at social functions being a keen dancer and singer. For many years he played the bassoon in Aldington Church choir. He was a staunch Churchman and a bell ringer. In his younger days he was a good goalrunner and supporter of foxhunting and coursing. Only 2 years ago Mr William Blacklocks, of Lydd, claimed him as guest at the Coursing Club annual dinner.

Mr Boulding will be widely missed as a gentleman of sterling character, loved and respected by many throughout the county. His wife died 34 years ago. There were no children, but deceased leaves a brother Mr Hy Boulding, of Kennington and a sister, Mrs Washford of Croydon. Longevity evidently is hereditary, for his father reached the age of 74 and his mother lived to see her 91st birthday.